KIRBY KRACKLE "On and On" Official Video Film

Posted by RaMSKeLLeR at 1:09 PM No comments:

Projects from the past... for the future?

A bit ago, my bro Jim asked me to do up the Mariners Moose as a Superhero. The Emerald City Comic Con (www.emeraldcitycomiccon.com) is sponsoring a Mariners game and he wanted the art to look a certain way. So BAM, here it is.

JD
Posted by RaMSKeLLeR at 10:14 AM No comments:

It's been a bit since I've posted, and with good reason! There's much to talk about but I have a group of friends (and their team of lawyers) who'd rather I didn't SAY anything... yet.

If you're interested in what's been going on the last 4 months, I'd suggest you go to http://www.roadtowolverine.blogspot.com/ . There you will see the process I undertook shortly after this years ECCC.

I've also conceded, and joined the TWITTER brigade in a further attempt to help some friends pimp out this project we've been working on! Very cool stuff, and admittedly my inner 12 year old has been on a permanent freak out during the entire process. Enjoy my pain and suffering for the greater good.

'skeller
Posted by RaMSKeLLeR at 3:25 PM No comments:

It's the truf! On this day John and Kay Green had themselves a lil bundle of hell... and it's been a roll ever since.

Thanks mom and dad. I couldn't have done ANY of this with out ya!

JD
Posted by RaMSKeLLeR at 11:34 AM No comments: 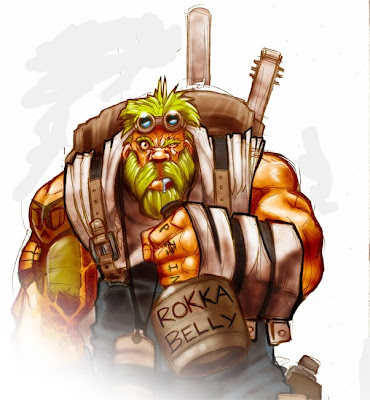 Well then. Why oh why is it that it's been near 6 months and no post? You might ask yourself this if I had bothered to keep your readership by posting during those 6 months. In fact, your too busy now because you've stopped playing your favorite MMORPG and gone on to find love, marriage, the house on the hill with the picket fence right next to the cast of 8 Is Enough.

But, for those of you, still single, playing games, and geeking out on some of the art thats been cranked out in the last year and a half, GOD BLESS YOU! I' gotta say it's been a trip, I've been busting my balls here to put out a game as a collabortation between my company DEAD MAN PRESS and Todd Downing's company DEEP7.
Fact is, after 5 years of tooling, breaking, and retooling, we released the first 20 copies of RADZ!

I couldn't be more proud of the effort put forth by my brothers. Todd, Jason, Mark, all kicked so much BOOTAY.

In it's current form, RADZ is a pen and paper adventure game to be played in the tradition of the old D and D games. After talking to George, Jim and Brian at http://www.thecomicstop.com/ ( in Lynnwood ) looks like we might throw together a l'il party where folks can buy the book and sit down with one of the creators and design their first character. More on that as we figure out how that's going to work.

In the long term, I'd love to see RADZ adventures animated into a "Heavy Metal"- esque movie, AND/OR a video game.

In the more foreseeable future, I've got a few artists in mind to help me with my first official RADZ TALES comic that will be released at next years show. We'll test the waters with a one shot, but I think I know the guys I want to tell this story.

I'm really not one for pics and shite, but a mad shout out goes to my boy Todd Downing who REALLY came through for me on the project in a major way. We could have sat at the DMP booth for both days and not sold a thing, and this year STILL would have been a TWO-DAY-LONG-VICTORY-LAP-WITH-MY-MIDDLE-FINGERS-IN-THE-AIR-AND -MY-SHIRT-OFF!


Thanks for blowing me up dude!


Another mad shout out to my boys Roger, Lucas, and David, for pimping me out to their friends and basically being all around cool guys. I appreciate the love fellas, here's some back at ya!

If for some reason you didn't make it to the show, fret not. You may not be able to have one of the covetted BLACK SPINE copies, but we can still get you one... 'cause we're like that!

For more info on RADZ pricing and availability hit up http://www.deep7.com/

Thanks to all who hunted me down this year. You guys MADE my con! Well, that and me getting revenge on Mike Oeming from last years arm wrestling defeat! Mwuhahahahaahaha

'Skeller here. Setting up one of, what I hope to be, many forums in which I can get my art out there to the masses. For those of you who were at the last two ECCC's, you saw me doing pics of peoples toons from CoH/CoV, WoW, Warhammer and Warhammer40k.

Posted are some B&W sketches that I did for last years con. Mostly CoH/CoV toons.

I love the fact that as these MMORPG's get better, they are allowing for more costumization. Thus, making characters closer to what folks would draw them to be... even for those of us who can draw, it's still a kick to see " your guy" running around, shooting things or what ever.

My goal with this blog is to get the word out that I'm supplying the service of drawing "your guy". The following drawings all took about an hour, hour and a half. And thats the amount of time I plan to spend on any commision work that comes via this blog.

So for now, enjoy.

Ram
Posted by RaMSKeLLeR at 7:51 AM No comments: